A recent trip in rediscovering the depths of God’s truths provided Meredith Andrews a renewed perspective and purpose for marriage, motherhood, and music 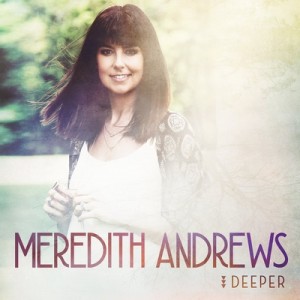 A lucky few have been listening to Meredith Andrews’ new album, Deeper, long before others. They aren’t label execs, press members or even friends or family. These were fans that happened to hear Andrews play some of the new songs in concert, and they just had to have them. More than that, they needed them.

“I had no idea when I would be able to hand someone a physical copy,” says Andrews. “People would ask and say, ‘I need this song now!’ Some of them were really adamant and I finally just said, ‘I’ll just email you the demo.’”

The response is representative of the larger story around pop artist’s new release, Deeper. The songs on her latest aren’t just inspirational. They’re more than catchy or memorable. They’re necessary. They are songs birthed from deeply personal stories of heartache and frustration, sorrow and confusion. They were songs that Andrews herself needed, so it’s no surprise that her audience needs them, too.

Three years have passed since her previous album Worth It All brought her further into the conversation of Christian music’s biggest female artists. After several years as a worship leader for Vertical Church in addition to two Dove Award wins to her name, Andrews has already amassed a large following. It made sense for Andrews and her husband, Jacob Sooter, who is also a producer, to move to Nashville and record a new album that would further her influence and platform.

Except it wasn’t that easy.

“Over the last two years, we’ve moved to Nashville and I had my third child,” says Andrews. “When you have your third, it’s like ‘Game Over’ in a good way, but you realize you really should clone yourself. In the midst of those changes, Jacob and I were also walking through the hardest season of our marriage that we’ve ever experienced—just a lot of stress, transition and attacks from the enemy all rolled together. We were learning to navigate the move, three kids, and full-time ministry because still on staff at our church in Chicago while living in Nashville. I was traveling and asking, ‘How does this all work? How do we stay sane and not be just ships passing in the night?’”

Such seismic transitions brought more than just stress to their household; it nearly tore them apart. The proverbial storms of life caused such damage on the surface that Andrews says she doubted her ability to weather it any longer. Everything was at stake—her family, her career, her ministry. Fortunately, God proved faithful with moments of inspiration and tangible help when Andrews needed it most.

“Last October, we had a friend come to our house to pray over us,” says Andrews. “We’d gotten to rock bottom, especially in our marriage, and realized we can’t fix this on our own. A sweet friend said, ‘I feel like the Lord is speaking to me that He just wants me to pray over you, your family and your house.’ She did and I felt like it was the beginning of the turn.”

The turn also included the aforementioned addition to the family, her daughter Francis. Andrews says giving birth to her third child could provide a tipping point in the midst of such chaos, but instead God used Francis to bring everyone together.

“Even though it was crazy and I felt overwhelmed when she was born, she was a ray of light in our darkness,” says Andrews. “It was a glimpse of what God wanted to do in our family. Her name is Francis. We call her ‘Frankie,’ but her name means ‘free one.’ I felt like the Lord was saying, ‘I’m bringing a joy and a freedom through this little baby.’

“I look at her every day and realize that she’s a free spirit. She’s such a joy. It was so crazy how the Lord used even her being born for us to catch our breath. We knew it was hard but it was worth it.”

Because of the level of pressures and internal struggle, Andrews also said they’ve also learned the value of boundaries—saying “no” to career pressure and ministry demands for the sake of family. It was a protective move that allowed them to rest and heal at a pivotal moment.

“In February of last year, over Valentine’s weekend, we cancelled some stuff,” she says. “We just dropped everything and got away as a family to a mountain cabin. That was really rebuilding for us. God was putting the pieces back together and doing a deeper work in us. It’s like the Lord said, ‘This isn’t hopeless. You just have to hang on to Me.’ So there were these lifelines being thrown out to us in the midst of what felt like this massive storm.”

Some lifelines also appeared in the form of the songs she was writing in the midst of it all. “Soar” is one of the first singles from Deeper that’s found an instant impact with fans, but before she ever sang it concert, Andrews says she sang along with the demo in the car—and not for reasons you might think.

“When I wrote ‘Soar’ with Mia Fieldes and Seth Mosley, it was almost like the Lord was saying, ‘Here’s a song and you’re going to need this.’ It was the beginning of walking through this valley,” she says. “God gave me a song to sing over myself long before I would ever sing it over others. And I did. I would crank up that demo in the car, and I would just cry. I would bawl and sing at the top of my lungs.

“I don’t normally listen to myself, but it was a song that I needed. I knew I had to sing it and believe it was true. It was me singing, ‘Even though I’m in the valley, I believe your promises. I believe that you are working while I wait. Even in this waiting season, you’re in it and you’re still intentional in it.’”

“That was probably one of the first songs we wrote for this record, and the rest you can kind of draw a line of similarity through all of them,” she continues. “They all say the same thing in sort of different ways. The title track, ‘Deeper,’ is a song we wrote together with our friend Mia, and we were still banging our head against the wall wondering when this would end. It all felt so up and down, up and down. We needed freedom from this and we were asking, ‘God, when are you going to free us? Because we could use something real soon.’”

Through it all, Andrews is now in much happier and healthier, but it’s not because she ran from the problems surrounding her. Andrews says she titled the record Deeper because it is “all-encompassing,” and it’s the term that best describes her posture in this season of need. She’s learned lessons of what it means to lean deeper in what God has promised.

“I feel like God is bringing me to the end of the valley, and I’m seeing the light,” she says. “Because of this, I’ve realized that I have something to say that I didn’t have before. I’ve known God to be faithful in that darkness when I’d never known anything like that in my life. Now I have an authority to say, ‘I’ve known the Lord to be who He says He is. I’ve known Him to be true. He is on your side. He is working in a mighty way. He has a plan, so let Him do what He wants to do in your heart.’”

Andrews says it’s the ability to share the wisdom and hope from her own experiences that keeps her going deeper into the demands of her singing career. With three kids at home, it’s more difficult than it used to be to head out on the road or appear at an event. However, in limited stretches, it’s worth the investment for the sake of serving others.

“Even though I don’t love getting on a plane and leaving my kids, when I get to look people in the face and love on them and sing over them and invite them to sing with me the truth of who God is—His character and His love for us—there’s nothing else like it,” says Andrews. “It makes me come alive. I’m just so excited and expectant in being able to share these songs and stories with people, and hearing their stories too, and believing God will use these songs to speak hope into people’s lives where they have none.”