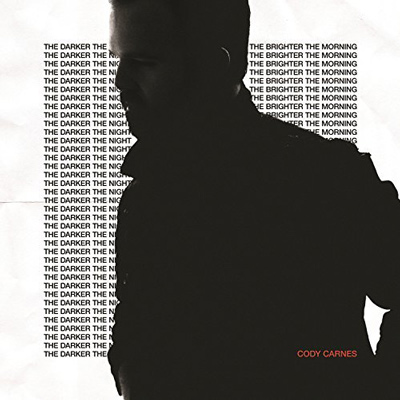 If you see Kari Jobe smiling wide offstage somewhere, it’s because she’s enjoying a long-awaited moment. Currently on tour with her husband Cody Carnes, Jobe is living a dream scenario for the couple—the ability to share their gifts and ministries with fans without taking time away from family. Together, they’re sharing the latest songs for a long fall tour run before joining the mega-production of Winter Jam later this year.

For Carnes, it’s the first time to see his name attached to a project after years of co-writing songs for his wife along with Aaron Gillespie, Christine D’Clario and various worship albums. We recently asked him about the emotions behind what he calls “carrying the song” and the musical vision for his compelling Capitol CMG debut, The Darker The Night / The Brighter The Morning (buy).

CCM Magazine: Do you remember the first impulse you had that maybe you could do what you’re doing right now as a vocation?
Cody Carnes: My parents tell me I started playing drums at two-years old, but I don’t know how true that is. It really started with drum and piano lessons as a kid. I was in drum line in high school and started writing songs at thirteen or fourteen. I started leading worship when I was fifteen in my youth group in my small west Texas town. That’s really where I fell in love with the worship-side of things. I remember having a moment asking, “Do I want to do pop music? Do I want to do rock? What do I want to do? Be in a band, or not?” I remember leading worship and having this moment with God where I realized, “Wow, I can create music and also help people connect with God at the same time. Why would I not want to do that?” That felt like the best thing I could do with music.

That set the course for me, even now, because I wanted on this new record to create a piece of art. I wanted to create music that I enjoyed listening to. I wanted it to be artistic, but also something worshipful that would help people connect to God all at the same time. So, it was just after high school when I realized I could do those two things together.

I had a funny moment around that time where I felt that I couldn’t write a worship song. I’d been writing songs for five or six years—or whatever it means when you’re “writing songs” as a teenager—but I could easily write pop songs. Worship songs, however, came out so cheesy. I felt like I was never going to be able to do that. I remember telling God, “I don’t know about the worship-thing, because I don’t want to sing everyone else’s songs all of the time.” I felt like God told me to step into it anyway, and the moment I did was the moment I wrote my first worship song. That ended up getting recorded on a Gateway worship record a long time ago. It was a cool moment to realize that if God calls you to do something, He will equip you to do it.