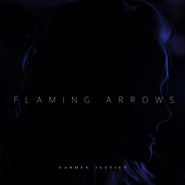 Carmen Justice has been a front-woman in Dove Award-nominated girl band 1 Girl Nation for the past five years, and this year, she is stepping out on her own. Her single “Flaming Arrows” marks Justice’s first release as a solo artist as she moves into the next chapter of her music evolution and will be available on all digital platforms on January 20, 2017

Writing from a place of uncertainty and doubt, the song was penned days after 1 Girl Nation split. The driving rhythms and explosive melodies of “Flaming Arrows” exudes an anthem about overcoming fear and marks the pop-alternative artist’s foray into an exploration of new creative freedoms, sounds and stylistic tones. The single also gives way to Justice’s genuine artistry, allowing her to examine the raw and vulnerable emotions she felt during a time of doubt, extreme financial uncertainty, and broken relationships.

“I was haunted by the bad experiences I had gone through as an artist, as a woman, and it was starting to control my mind,” explains Justice. “I got so burned by people in my life and the entertainment industry that I didn’t know how much longer I could take it.” She continues, “ I was always living in fear…fear of not making enough money, fear of failure, fear of people knowing my mistakes I’ve made in my life—the list could go on—but I was comforted by Ephesians 6:16 that says, ‘Take up the shield of faith, with which you can extinguish all the flaming arrows of the evil one.’ With the faith I have in Jesus, I can overcome all of these voices of fear in my head.”

The pop star’s desire is for this song to empower those who are struggling with their own ghosts, whether it be bullying, addiction, anxiety, shame, doubt and help them take control of their fears, face them and put them in the past.

About Carmen Justice | Carmen Justice is a critically acclaimed pop star, recognized as one of three vocalists in the Dove Award-nominated girl group, 1 Girl Nation (1GN). She has shared the stage with mega-artists including TobyMac, Sidewalk Prophets, NF, and Andy Mineo. But after five years being a part of a group, Justice is stepping out on her own as a solo artist, revealing a more edgy pop-alternative sound paired with honest lyrics. The Nashville native is preparing to release her first single “Flaming Arrows” in January 2017, with an EP to follow later in the year. Justice’s hope is to empower listeners to overcome their fears and love those around you.