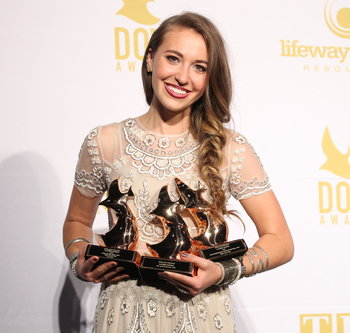 At fifteen years old Lauren Daigle was sure of one thing: she would never make Christian music.

“At the time I just thought I can’t do that, my friends are going to judge me if I sing Christian music. So then I thought, ‘I definitely can’t do anything in worship. If I do worship [music], that just makes me old, all of a sudden!’” she says with a laugh. “These were my thoughts at fifteen!”

Now nearly ten years later (a realization that makes the twenty-four year old Daigle gasp in disbelief), she has become a household name in Christian music. With her first album How Can It Be debuting at #1 on the Billboard Christian charts earlier this year—and still standing strong at #4 even twenty-eight weeks later—and her first trip to the Dove Awards a staggering success, with a take-home of the coveted New Artist of the Year award and Song of the Year for “How Can it Be,” Daigle has cemented her place and indelible role in an industry she once doubted she could ever belong.

“I really believe so many people just long for one person to believe in them,” she says. “I feel like [New Artist of the Year award] was not just one person, but an entire industry saying, ‘Hey we believe in you, we believe in what God is doing through you!’ and giving me that warm embrace.”

But that embrace didn’t come easily for Daigle, who spent several years of her early career with sights set on mainstream success, and early signs from God telling her she was destined for greatness.

“When I was fifteen years old I was diagnosed with an illness called cytomegalovirus and I was placed on home bound rest for about two years,” she explains. “And I kept having all of these dreams about tours, awards, charts and all of these different stages I’d be on. And I was like, ‘God what is this about? Am I just having cabin fever, or is this real—what’s going on?’ Then He affirmed me. No, this is what I have in store.”