CCM: What do you think fans will be most surprised to learn about you from the book?
LH: I have never really shared publicly about my childhood, my parents, and the difficulties we went through. And I never really talked about some of the people and circumstances that shaped my career when I first started out. There are probably a lot of people who thought I always wanted to be a singer, but that’s not true. So I think there will be more than a few surprises in the book even for people that have followed me during my entire career.

CCM: Are there any moments you had reservations about sharing that eventually made it in? Why did you ultimately decide to include them?
LH: My dad’s journey gave me pause when I first wrote it out. Your father serving time in prison is not something you reveal to everyone. However, the real story with dad and mom is how they overcame their life challenges and how my mother’s devotion to him, along with her many prayers, helped him break a cycle and become the man that both she and I needed him to be.

CCM: Can you tell us a little bit about the racism you experienced in the early part of your extraordinary career and how you were able to rise above being treated so unfairly?
LH: It was the early ‘70s, and I remember looking into a restaurant owner’s eyes in Little Rock, Arkansas as he asked the musical group I was in, which included both black and white kids, to leave because he didn’t serve mixed races. He could not, would not and had no intention to serve us. I looked into his eyes as he raged on. But instead of feeling hate, I felt a bit sorrowful for his views and his stance. How can any human created by God consider themselves better than another? I prayed for that man often over the next few months. 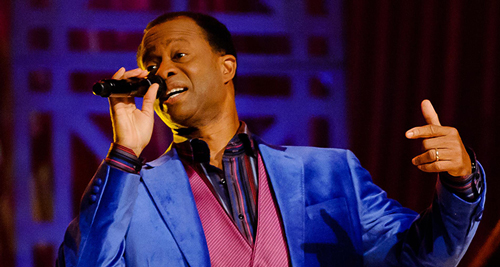 It was many years later when I went back to Little Rock as a solo artist and did a concert at a large church. I found out that after we told the Little Rock Bureau Of Racial Relations what happened, the restaurant was closed—went out of business or was put out of business. I didn’t mention the long-ago incident to anyone while I was there, and yet I felt something. I felt that old stuff kind of brewing up again. I felt that old awareness of walking into a store to buy a shirt or some toothpaste and waiting, ready for somebody to say something negative. And you know what? There are times I still feel a little bit of that. But that night when I sang at the church, it would have served no purpose to talk about that old situation with its past attitudes and prejudices. It would have done no good to beat up on those people who weren’t even there in the ‘70s, had nothing to do with the confrontation, and make them relive it for guilt or shock or any other reason. The purpose that was served instead was leading those folks in worship, rejoicing in the Lord who does indeed bring about change in our hearts by the Holy Spirit.