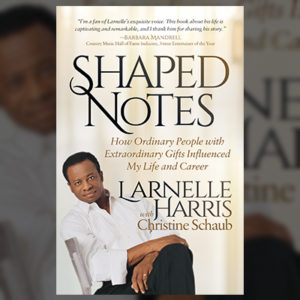 For five decades, Larnelle Harris has sustained one of the most respected and inspiring music ministries that’s amassed no less than nineteen #1 radio singles, five GRAMMY Awards, countless Doves, plus a double induction into the Gospel Music Hall Of Fame (both as a solo artist and member of the Gaither Vocal Band). Yet throughout all that time, the man behind such songs as “Amen” and “Mighty Spirit” right up through the title track to his latest compilation, “Disturb Us, Lord,” has never put his life story to paper, that is of course, until now.

Co-written with Christine Schaub (author of the Music Of The Heart series), Shaped Notes: How Ordinary People With Extraordinary Gifts Influenced My Life And Career (Morgan James Publishing—buy), tells it all with refreshing candor, right down to the nitty gritty details of a father who served prison time, encountering racism on the road and even losing his voice for a season. Here are many more eye-openers from an extensive exchange with the legendary small town tenor who wound up performing at the White House, Carnegie Hall and literally all over the world.

CCM Magazine: What made you decide that this was the right time to write out your story?
Larnelle Harris: I will be honest. The idea of writing my autobiography was not very appealing to me. But as I prayed about it and thought about some of the people that had paid it forward in my life, I realized their stories were worth telling. None of us achieve any success alone, and as I began to recall the people who supported, challenged, and motivated me along the way, it was quite humbling. I hope what readers take away from this book is that we all have a sphere of influence in our lives. And sometimes, just by offering someone in our lives a word of encouragement or showing them kindness with an unexpected deed, we can help shape a person’s life forever.

CCM: This isn’t a typical autobiography in the sense that you strictly write about your life, but also, so many people along the way who helped shape it. How did you arrive at that format?
LH: I make frequent trips back to my hometown of Danville, KY. Danville is “The City Of Firsts: the first Courthouse in Kentucky (1785), the first U.S. Post Office west of the Alleghenies (1792), the first Capital of Kentucky (1785), and the first Political Club in the West (1786).” In 1809, Danville’s own Dr. Ephraim McDowell became the first physician in the world to successfully remove an ovarian tumor.

But for me, it was the place where I did my first concert as a nine-year-old with Miss Georgia Donehy, my piano teacher. She was one of many wonderful people that God put into my life for a season. As I’ve grown older, I’ve realized that I needed to say a word of thanks to her, and the many others who spoke good things into my life. I think about that photo of a turtle sitting on a fence post. It did not get up there by itself.