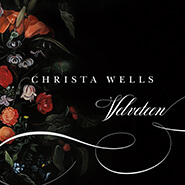 If you don’t know the name Christa Wells, you might not realize just how often her songs have crossed your path. From her award-winning, aching hit “Held,” made popular by Natalie Grant, to her collaborations with Plumb, Ellie Holcomb, and Selah, Wells has been quietly leaving her poetic mark on Christian music for over a decade.

But some songs need to be heard in the writer’s own voice. Over the years, she has released a number of independent albums, combining soulful singing with an earthy indie pop sound. A few days before releasing her new EP Velveteen (buy) into the wild, she talked to us about her journey as a songwriter, the communities that keep her going, and finding her place in a “go big or go home” world.

CCM Magazine: For those who haven’t discovered your music yet, what’s one thing you want everyone to know about you?
Christa Wells: I don’t… really want to be known [laughs]. I’m definitely a songwriter first, then a “reluctant performer.” I’ve discovered a joy in sharing the music firsthand, but I’d be very comfortable just being at home songwriting. But I think God doesn’t want me to be that comfortable.

The songs that come most naturally can’t be covered by mainstream artists very well. It became important to me that these songs be heard, even if just by a small handful of people. I’ve never been a “go big or go home” kind of person. I’ve just been about doing the work, and if it matters to a few people then it’s worth it.

CCM: We know you’ve done a couple of Kickstarter campaigns and are now on Patreon. Is it helpful to attach names to the people supporting your work?
CW: Yeah, definitely. People who are willing to invest in Kickstarter, Patreon, and PledgeMusic are a special kind of listeners. It’s a community of its own, and I’ve gotten to know some of those people well and meet them in person. It’s very touching that people really want to be part of that, and as an independent artist, it’s made all the difference in the world on a pragmatic level.