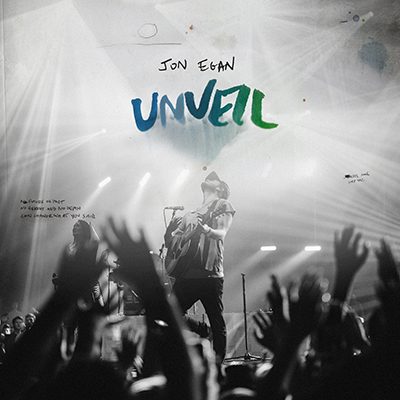 For Jon Egan, the act of writing and singing worship music isn’t a standard Sunday morning element. The longtime leader of Desperation Band and worship leader at New Life Church in Colorado Springs defines it as an act of defiance, a violent push against the forces of depression and anxiety that have plagued him for years. His latest recording, Unveil, is a live declaration of victory over and through those very struggles.

Unveil is a spirited live release that allows an emotional set to organically flow through several preludes or spontaneous moments of congregational worship and prayer. Egan has learned to musically push through his battles, and the results are found on powerful refrains like “What You Said” that remind the listener that God has the final word. “Unveil” comes from a broken place, crying out to God to help the listener sense and see Him when the need feels so great.

Whether the songs come from more confident territory (“Nehemiah”) or vulnerable terrain (“The Name We’re Running To”), Egan’s new release is a testimony to holding out faith in the midst of an emotional roller coaster. Those battles are often hidden and isolated, but Egan’s gift of an album will meet a lot of people right where they need it most.