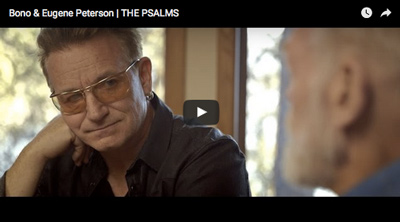 A few days ago a wonderful little film showed up online. It featured one of my favorite authors, Eugene Peterson, having a conversation about the Psalms with Bono, one of my favorite songwriters. It actually brought tears to my eyes, not just because of the good content but because the video was so well done. I even texted the filmmaker Nathan Clarke to tell him so.

But Bono said something that prompted a Twitter response from me, and that response stirred up a good discussion on the internet—a discussion that I hope will bear some good fruit.

At one point Bono says, “I’m talking about dishonesty that I find a lot of in Christian art. A lot of dishonesty. And I think it’s a shame because these are people who are vulnerable to God—in a good way—vulnerable. I mean porous, open. I would love if this conversation would inspire people who are writing [with] these beautiful voices, these beautiful gospel songs [to] write a song about their bad marriage. Write a song about how they’re pissed off at the government. Because that’s what God wants from you. The truth…and that truthfulness…will blow things apart. Why I’m suspicious of Christians is because of this lack of realism. And I’d like to see more of that in life, and in art, and in music.”

It’s clear that Bono, for whom I have a lot of respect, is shooting from the hip, and while it’s tempting to criticize and parse every word he’s saying, it would do us all good to remember how many conversations we’ve had over coffee that we’re thankful weren’t being recorded, and aren’t being listened to hundreds of thousands of times. (As of this writing, the video has almost 350,000 views.) It’s important to keep the context in mind, and to recognize the spirit of what he’s saying.

My Twitter response was this: “I get where Bono is coming from, but the fact is, there’s TONS of honest Christian art. It just isn’t mainstream.” Allow me to expound, now that I’m not constrained to 140 characters.

First, there’s no shortage of honesty in art created by Christians. (For the sake of this argument I’m going to assume we mean honest and excellent. There are plenty of bad songs that are honest, and we certainly don’t need more of those.) I think Bono was speaking broadly, about the whole of popular Christian music, and like I said, I get where he’s coming from. There’s no Psalm-like anger or vengeance or confession there—though there’s plenty of Psalm-like joy and praise, much of it lifted straight from the Bible. But I bristle whenever I hear people complain about the state of Christian music because there’s so much good music, good writing, good visual art being made by followers of Jesus. When they say, “Christian music is so bad,” I answer, “What are you listening to? Because I can name scores of songwriters who are Christians whose music is excellent, honest, beautiful and true, not to mention well-produced.” Jill Phillips? Andy Gullahorn? Josh Garrels? Jon Foreman? Sandra McCracken? Thad Cockrell? Colony House? U2?