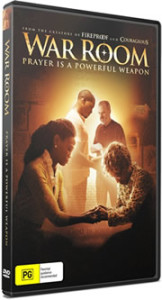 NASHVILLE, Tenn – The heartwarming and inspirational box office hit WAR ROOM debuts Dec. 22 in the Christian bookstore market on Blu-ray™ and DVD from Provident Films and Provident Distribution. Church site licenses are available for pre-purchase on Nov. 9 and will begin shipping on Dec. 8. The products available will be the CBA Collector’s Edition DVD and the CBA Blu-Ray/DVD Combo Pack which both include special content only available in Christian Bookstores.

Packed with special features, the WAR ROOM Blu-ray and Collector’s Edition DVD include hilarious bloopers & outtakes, the “Warrior” music video by Steven Curtis Chapman, and “The Art of Jumping Rope” featurette where viewers get to meet Coach Stephen Simpson and hear how he trained the actors to double Dutch in two weeks. Blu-ray™ and DVD bonus materials also include Deleted Scenes, Commentary from the Kendrick brothers, plus eight Behind-the-Scenes featurettes that are, in many ways, as inspirational as the film. These include “The Making of WAR ROOM,” which dives deeper into the unique production, “The Heart of WAR ROOM,” that focuses on its powerful message and meaning; and “Modern Day Miss Clara,” which introduces viewers to Molly Bruno, a 91-year-old prayer warrior and one of the inspirations behind the character of Miss Clara. Also included are “From Auditioning to Acting,” an insider’s look at the casting and “Investing in the Next Generation,” which shows how the Kendricks’ mentored aspiring filmmakers on set.

“A Pastor’s Call to Prayer,” features spiritual leaders like Dr. Tony Evans and Pastor Ronnie Floyd sharing the importance of church leaders guiding their congregations to the centrality of prayer. The faith community will love “Church on Its Knees,” which reveals how church families can set up their own prayer ministry; and “WAR ROOM in 60 Seconds,” a fast and funny retelling of the plot of WAR ROOM with a twist.  Both the WAR ROOM feature film, and the new Behind the Scenes bonus featurettes promise audiences a journey of laughter and tears to enjoy together this coming Christmas.

Features exclusive to the products offered to the Christian bookstore market include a devotion by Alex Kendrick, a devotion by Stephen Kendrick, a “Wall of Remembrance” featurette and a special behind-the-scenes feature about the home used during filming titled “Redemption For the Mitchell Home”.