Widely sought after guitarist, songwriter, producer and soon-to-be author, Stu G (founding member of Delirious? and One Sonic Society, as well as current touring guitarist for Michael W. Smith), independently releases Have You Heard 2015 on Stugiology Music Dec. 18 through The Fuel Music distribution. First recorded in 1995, this completely remastered, 20th anniversary edition of the album pre-dates Stu’s work with Delirious? and features every member of the original Delirious? lineup. It also includes three newly recorded songs.

After studying at London’s Guitar Institute, Stu G formed a couple of club bands and quickly emerged as a sought-after session guitarist. This eventually led him to a young Martin Smith, who was leading worship at a youth outreach called “Cutting Edge.” Stu enlisted Martin as co-producer and musician on Have You Heard, and pulled in the rest of the Cutting Edge Band, which included Stew Smith on drums, Jon Thatcher on bass guitar and Tim Jupp on Keyboards. Together, these five musicians went on to form Delirious?, which is widely known as the band that birthed the modern worship movement.

“Beyond all the nostalgia of going back and rediscovering this music that pre-dated Delirious?, it’s remarkable how well these songs have held up to the test of time,” says Tony Patoto, who managed Delirious? before starting The Fuel Music in 2008. “Stu G has uncovered an extraordinary album that will shine like new once again for every Delirious? fan and fans of modern worship.”

“I thought it would be good to celebrate the journey and the 20th year anniversary with a new remixed and re-mastered version of Have You Heard,” says Stu G of the album originally recorded in Jupp’s West Park Studios in Littlehampton. “It’s been a lot of fun rediscovering these songs and remembering all that’s happened since we first recorded them. I wonder what the next 20 years will hold!”

Over the years, some of the songs on Have You Heard appeared on various recordings, including some of Delirious? B-sides. With only about 500 cassettes made of Have You Heard, Stu laughs, “Remember cassettes? Every now and then someone on social media would post a photo saying: ‘I’ve got one of these.’”

Capturing the youthful energy and passion of Stu G and his Delirious? bandmates that toured the world several times over before disbanding in 2009, Have You Heard 2015 also features two “reinvented” songs from the original tracks that were re-recorded and produced by Matt Stanfield: “The Rain – [2015]” and “Rest – [2015].” The album further includes a new live recording of “Come Like You Promise.” All three of these songs were mixed by Shane D. Wilson (Switchfoot, David Crowder Band, Jeremy Camp), who also remixed the rest of the album.

The full Have You Heard 2015 track listing follows: 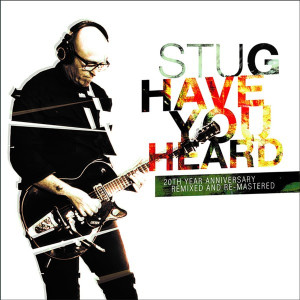 Stu G (Stuart Garrard) is perhaps best-known as the guitarist for the RIAA Certified Gold-selling, GRAMMY-nominated and Dove Award-winning British band Delirious?, which, for nearly two decades, delivered many of the best-known worship songs in modern Christendom. A founding member of One Sonic Society along with Jason Ingram and Paul Mabury, Stu also recorded and released his first solo project, Of Burdens, Birds, and Stars (2013). When not touring with Michael W. Smith or adding his sonic paint to Casting Crowns, Chris Tomlin, Matt Redman, Meredith Andrews, All Sons & Daughters, Amy Grant and many others’ recordings, Stu is writing, recording, speaking, leading worship and working with JHS on a custom line of guitar pedals. The Kilt, Stu’s first signature pedal, released June 2015. As a songwriter, Stu has co-written Delirious? hits like “Rain Down,” “Majesty,” “Deeper,” “My Glorious,” “Investigate” and “Inside Outside,” as well as “The Greatness of Our God” (Natalie Grant / One Sonic Society), “Open Up The Heavens” (Meredith Andrews) and many more.

Stu lives in Nashville with his wife Karen, is writing his first book, and is always discovering new ways to express the truths he holds on to. “People are my energy and inspiration. It’s in people that I see why creation was such a good idea.”

For all the latest Stu G news and tour information, go to www.stugworld.com