“Relishing an opportunity to return to his roots, taking family and friends along for the ride (Billboard/Deborah Evans Price),” Chapman partnered with Billboard for an exclusive first listen to “‘Til The Blue” featuring Gary LeVox. The heartfelt song was written by Chapman, Lori McKenna and Barry Dean. Chapman first performed “‘Til The Blue” on the Grand Ole Opry stage and will return to the Opry for a performance and in-store signing of Deeper Roots on March 26.

Leading up to the album’s street date, Chapman released a bluegrass version of his hit single “Dive” from the GRAMMY®-winning album Speechless. Ricky Skaggs collaborated with Chapman on the new rendition that features a “driving bluegrass beat” and “that distinctive Steven Curtis Chapman sound” (Bluegrass Today/John Lawless).

Deeper Roots serves as the sequel to Chapman’s 2013 Billboard No. 1 Bluegrass Album Deep Roots, released exclusively with Cracker Barrel. The 13-track collection features a mixture of familiar hymns like “Life Is Like A Mountain Railroad” and “I’ll Fly Away,” fan-favorite hits including “Cinderella” and brand-new songs such as “Where The Bluegrass Grows” and “‘Til The Blue.” Deeper Roots was produced by Chapman and Brent Milligan. 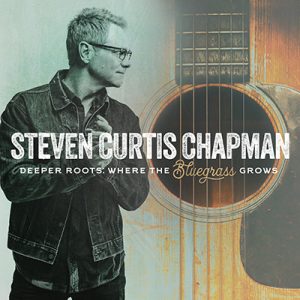