In addition to being known as a singer and songwriter, Matthew West continues to gain notoriety as an author. This week marks the release of his fourth book, a new devotional titled Today Is Day One. The book features 200 devotions from West about how each day is a new gift from God and should be lived with joy, grace and gratitude. To celebrate the release, West took to Facebook to lead an online devotional with thousands of fans, which included readings from the book, acoustic performances, fan requests and Q&A’s. To find out more about Today Is Day One, please visit DayOneDevo.com. 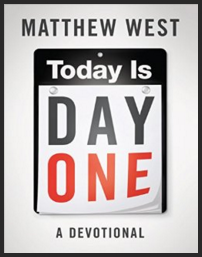 On the road non-stop sharing his music with the masses, West will be co-headlining the Winter Jam 2016 Tour Spectacular along with for King & Country. Presented by Holt International, the 48-city tour kicks off January 2 in Charleston, WV and will wrap April 3 in Louisville, KY. Not a stranger to Winter Jam, West first joined the No. 1 tour in the world in late 2012 and into 2013 along with TobyMac and RED (click here to view the latest schedule for 2016’s Winter Jam tour). This fall West also headlined his own tour, the highly successful “Live Forever Tour,” which just concluded on November 21. Sponsored by Compassion International, close to 4,000 children were sponsored during the 39-city tour.

“My heart is full after an incredible time out on the road during the Live Forever Tour,” West shares. “I am thankful to all who came out to the shows and showed us so much love. It was also my honor to speak on behalf of Compassion International throughout our tour encouraging people to DO SOMETHING and help children in great need around the world. And while the Live Forever Tour is officially over, I believe its impact will indeed live forever in the form of hearts touched and lives changed. At the end of the day, that’s what counts.”