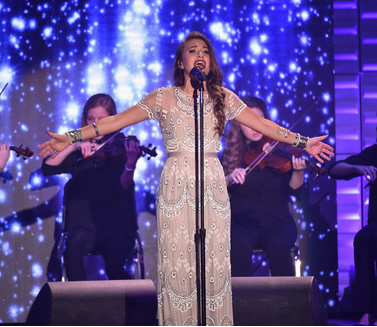 NASHVILLE, Tenn.—It was an incredible evening for Centricity Music artist Lauren Daigle at the taping of the 46th Annual Dove Awards that will air on the Trinity Broadcasting Network, Sunday, October 18, 9:00 pm CST. The talented singer/songwriter won three prestigious awards including New Artist of the Year, Song of the Year (“How Can It Be”) and Pop/Contemporary Song of the Year (“How Can It Be”). The triple win also earned Daigle the honor of being one of the top award winners at last night’s show. This is a remarkable achievement considering that Daigle’s debut album, How Can It Be, released April 2015.

Daigle was also a sought after interview on the Dove Awards red carpet that included interviews with WKRN-TV/ABC (live feed), WTVF-TV/CBS, RFD-TV, Juce TV, Salem Music Network and CCM Magazine, which will feature Daigle as the cover artist on the November 1st issue.

“What a night! I’m completely in awe of how graciously the industry welcomed me,” says Daigle. “Many people find themselves in a lifelong search for just one person to believe in them and in their art. Last night was a clear representation of an industry that is championing me on. I’m truly grateful for the opportunity to represent a God full of mercy and love that He would not only allow us the ability to create, but also to be rewarded for obedience. Thank you to everyone who played a part in believing in ‘How Can It Be’ and the heart behind the music.”

Daigle had another major career achievement this week, as her second single, “First,” reached No. 1 on Billboard’s National Christian Audience Chart (NCA). This is the first NCA No. 1 song for Daigle and the first chart-topping single for her label, Centricity Music. Lauren’s debut single, “How Can It Be” peaked at No. 6 on the NCA chart in March 2015. Daigle also has become a video favorite with her reaching 27 million views on You Tube.

“What a special week in the continuing journey for Lauren Daigle. To land her first No.1 single was a huge achievement for her and the radio team. To have the radio community embrace Lauren with open arms is so rewarding.” states Steve Ford, General Manager, Centricity Music. “Then to have the Christian music community do the same with three Dove Awards is beyond overwhelming.”

Daigle currently is on tour with Casting Crowns Thrive Tour that will run through November, followed by the Chris Tomlin ADORE Christmas Tour in December.  For continued updates on Daigle please visit www.laurendaigle.com, www.facebook.com/laurendaiglemusic,  www.twitter.com/lauren_daigle.

About Lauren Daigle
Dove Award and K-LOVE Award winning artist, Lauren Daigle, had her first full album, How Can It Be, debut No. 1 on Billboard’s Christian Albums Chart in 2015. Her second single from the project, “First,” reached No. 1 on Billboard’s National Audience Chart. Daigle was a multiple award winner in 2015 at the 46th Annual Dove Awards (New Artist of Year, Song of the Year, Pop/Contemporary Song of the Year) and at the K-LOVE 3rd Annual Awards (Worship Song of the Year). She was named one of Christian music’s 2014 breakout artists with her debut EP, How Can It Be, reaching No. 1 on iTunes Christian Albums Chart and named as one of the Top 20 Christian releases last year by the online retail outlet. The title track went No. 6 at Christian radio, No. 1 on iTunes Christian Singles Chart and named by iTunes as one of the Top Christian songs of 2014.  Daigle also serves as a worship leader at Andy Stanley’s North Point Community Church in Atlanta, GA.

About Centricity Music
Centricity was founded in 2005 with a commitment to artist development and stylistic diversity. Based in Franklin TN, artists include Aaron Shust, Andrew Peterson, Carrollton, Jared Anderson, Jason Gray, Jonny Diaz, Jordan Feliz, Lauren Daigle and Unspoken. The company’s mission is to enable their artists to create life-changing experiences for the world, by providing label, management and publishing services.