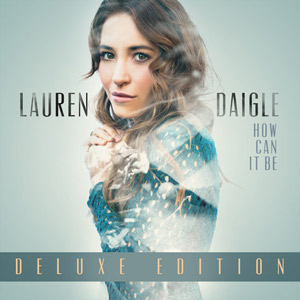 LOS ANGELES, Calif.—Award-winning Centricity Music artist Lauren Daigle, will perform live on NBC’s Today show August 2, 2016 during the 10:00 a.m. EDT/PDT hour. Following her Today show airing, Daigle will hold a special in-store appearance at The Shop at NBC Studios at New York’s 30 Rockefeller Plaza. Daigle will meet fans, sign autographs and take photos with attendees, in support of the recent release of the deluxe edition of her debut album, How Can It Be (buy).

Daigle, who is currently opening on the Hillsong UNITED Empires Tour, will embark on her first headline tour, titled A Night with Lauren Daigle, with special guest Chris McClarney, sponsored by CURE International, from October 12-29, 2016.

Since her debut in 2015, Daigle has received a GRAMMY® nomination, one Billboard Music Award, three Dove Awards, and three K-LOVE Fan Awards. Her singles “How Can It Be” and “First” hit #1 on both iTunes’ Christian Songs Chart and on the Christian Digital Tracks Chart. “Trust in You,” which earned Daigle her first #1 single spot on Billboard’s Hot Christian Songs chart in March 2016, held its top spot after 13 consecutive weeks and landed at the #1 position on the iTunes Christian Songs Chart and the Christian Digital Tracks Chart. “How Can It Be” has had more than 15 million views.

How Can It Be, the album, logged more than five weeks at #1 on Billboard’s Top Christian Albums chart, and premiered in the Top 30 on the Billboard 200. It also reached #1 on the iTunes Christian Gospel Top Albums Chart with more than 360,000 album sales and 880,000 track sales, positioning her as the fastest-selling new artist in Contemporary Christian music in the past decade. Daigle has had more than 90 million YouTube and Vevo views, with approximately 300,000 subscribers.