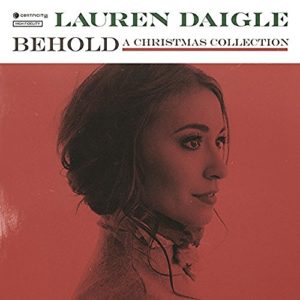 NASHVILLE, Tenn.—Award-winning singer/songwriter Lauren Daigle, will release her first-ever Christmas album titled Behold-A Christmas Collection (buy), on October 21, 2016 via Centricity Music. Produced by Paul Mabury and Jason Ingram, the style of the holiday album pays homage to the sounds of Daigle’s hometown of New Orleans, LA. Featuring soft jazz renditions of Christmas favorites, Behold includes such classics as “Have Yourself A Merry Little Christmas,” “Silent Night,” “O Come All Ye Faithful,” “What Child Is This,” “O Holy Night,” and more; in addition to an original composition titled “Light of the World,” which was written by Paul Mabury and Jason Ingram. Pre-orders for the album will begin on September 26, 2016.

Daigle, who just finished opening for Hillsong UNITED on their acclaimed EMPIRES Tour, will embark on her first headline tour this fall titled A Night With Lauren Daigle, with special guest Chris McClarney, in support of her recently released How Can It Be (Deluxe Edition—buy). The tour, sponsored by CURE International, is scheduled from October 12-29, 2016 beginning in Memphis, Tennessee.

Says Daigle, “As a little girl, New Orleans graphed its culture deep within my veins and I fell in love with the cultural vibrancy and the resonating sound of New Orleans jazz. The city is my happy place, a place I love more each time I return home. It has been a dream of mine to make a record of this caliber, touching respectfully on the roots of my upbringing and honoring those who paved the way. I hope as you listen to this record you are taken away by the awe and wonder of Christ in this season; and peace fills your home, your spirit and you find rest in the midst of rush. And above all, I hope Jesus is found riding on the sounds and into the hearts of all who come and behold.”

“When you get a chance to combine Christmas, the artistry of Lauren Daigle, and the New Orleans sound, you do it!,” says John Mays, VP of Centricity Music A&R. “This recording has ended up being a completely unique and joyful expression of Lauren’s music. She’s loved the process of making it, and we’re excited to get to share it so that families everywhere can have a richer celebration of the season for years to come.”