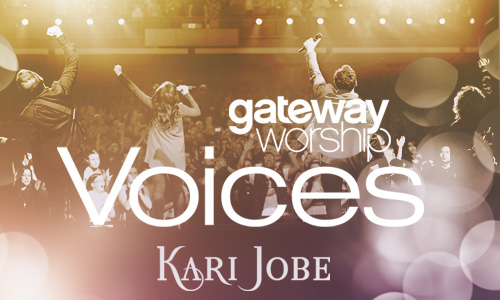 The collection includes 10 of Kari’s songs from five of Gateway’s live albums as well as one song, “My Beloved,” from her best-selling, self-titled studio project. The recording includes global church favorites such as “O The Blood,” co-written by Gateway’s Thomas Miller, “Revelation Song,” written by Dove Award winner Jennie Lee Riddle and “You Are For Me,” written by Kari. Together, these three songs alone have garnered over 30 million YouTube views for their live music videos and fan-generated content.

All 11 songs on the project will be available as a standard digital album through service providers including iTunes and Amazon. In addition, a special double-disc set, available at Christian retail stores, features the CD and a free DVD filled with over $60 of resource content including enhanced lyric videos with stereo, split and click track options, chord charts, sheet music and lyrics.

Gateway Worship Voices: Kari Jobe is part of an ongoing series for Gateway Worship, the team led by Executive Senior Pastor Thomas Miller and Executive Pastor of Campus Worship Mark Harris. Gateway Worship is the primary worship expression for Gateway Church, one of the largest and most influential churches in North America. Leading only 200 people in its infancy, the worship team now ministers to over 35,000 weekly attendees along with thousands more who participate in online services.

United with one voice, the Gateway Worship collective of more than 40 worship leaders, musicians, songwriters and others, are committed to leading the church body into a place of intimate worship and an understanding of the power of the Word of God expressed through music. Gateway Worship, whose songs are administered and promoted by Integrity Music, have sold hundreds-of-thousands-of-albums and individual tracks while contributing numerous songs that rank within the top most-used songs in churches around the world according to CCLI (Christian Copyright Licensing International). More information on Gateway Worship and Gateway Church can be found at http://gatewayworship.com and http://gatewaypeople.com.

Kari Jobe has been using her gifts to lead people into the presence of God through worship since the age of 13. As a young girl growing up in Texas, she never imagined that she would win a Dove Award, be nominated for a GRAMMY Award, or be lauded by the New York Times. She only knew that she had a heart for broken people and a deep desire to lead them to the cross. As a longtime member of the Gateway Worship team, Kari has written and recorded songs for Gateway albums including Wake Up The World and Living For You. Her solo albums include Kari Jobe, Majestic, Where I Find You, Bethlehem and the Spanish albums Le Canto and Donde Te Encuentro. More information on Kari is available at http://karijobe.com or by following her on Twitter @karijobe.