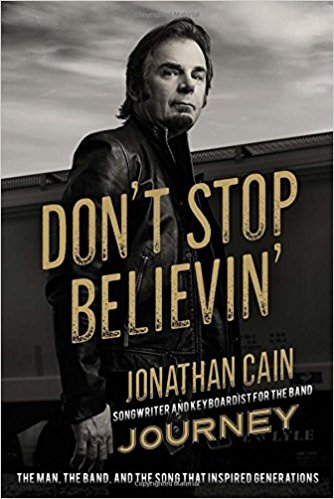 NEW YORK, New York—In the first memoir by a member of the band Journey, keyboardist and songwriter Jonathan Cain shares his remarkable story as well as behind-the-scenes details of his 36-year career with one of America’s favorite rock bands. Don’t Stop Believin’: The Man, the Band, and the Song that Inspired Generations (buy) is set for release on May 1, 2018 (Zondervan Trade). The memoir is co-written by Travis Thrasher and coincides with the kick-off of Journey’s 58-city summer tour with Def Leppard.

Don’t Stop Believin’ begins with Cain’s childhood in Chicago, where his first exposure to music was listening to his grandfather play the fiddle. Readers learn of the tragic fire he survived at his grade school in which 92 classmates died, and the profound impact it had on this young boy. After the fire, Cain found solace in music and his dream of becoming a priest was put aside in order to pursue it. His perseverance brought him to Sunset Boulevard in Los Angeles where he discovered a thriving late-1970’s rock scene before getting his first big break with The Babys fronted by John Waite.

Readers follow as Cain auditions for Journey, gets the gig, and then goes on to write/co-write some of the biggest rock songs in history, including “Don’t Stop Believin’, which is the No. 1 digital catalog rock song in history, as well as mega hits such as “Faithfully,” “Open Arms,” “Separate Ways,” “Who’s Crying Now,” and many more. Cain chronicles the massive success along with some devastating failures—including Steve Perry’s decision to leave the band—and discusses the legacy Cain wants to leave through his music.

The book closes with Cain sharing what his Christian faith means to him, including the powerful realization that God has always been with him throughout his amazing journey—even through the terrible moments like the tragic school fire when he was eight years old. He also discusses his recent marriage to pastor and presidential advisor Paula White.

“It’s impossible to fathom the incredible journey between that fiddle of my grandfather’s and the Hall Of Fame. All of those years spent under God’s guiding hand. It’s a story about patience, persistence, and the pursuit of something majestic. And it’s one I’m honored to be able to share,” writes Jonathan Cain.

About Jonathan Cain | In 1976 Jonathan Cain released his first solo record, Windy City Breakdown (buy). In 1979 he joined the band, The Babys, and in 1980 joined the rock band, Journey, rounding out the songwriting genius behind the defining album, Escape (buy). Cain’s signature piano, synth playing and songwriting contributions with Journey, The Babys and Bad English have earned him many Billboard hits, multiple gold, platinum and Diamond-selling records, a Star on the Hollywood Walk Of Fame, a GRAMMY nomination and the best-selling catalog rock song in iTunes’ history (“Don’t Stop Believin’”). Journey was named as the fifth best band in rock history in a 2005 USA Today opinion poll, was inducted into the Rock And Roll Hall Of Fame in 2017 and continues selling out arenas worldwide.