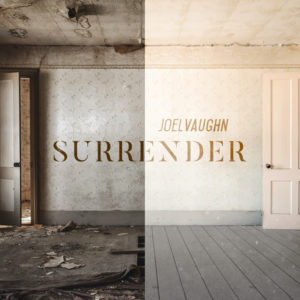 Growing up in the south Joel Vaughn was influenced by many different genre’s but none were closer to his heart than pop and contemporary music. Vaughn started singing in his local church at the age of seven and he has kept going ever since.

Known as “the singer” of an all-musical family, Vaughn originally taught himself to play guitar at age 14, simply to keep up with his siblings, all of whom played instruments. But his love of playing didn’t stop at guitar, and he also decided to pick up the drums and piano as well. By the time he was high-school senior he was writing songs & playing whatever musical instruments he could get his hands on.

Vaughn studied at West Texas A&M University, and he began to lead worship for student ministries and churches in the area. Over the last 12 years as a worship leader in Texas, he has released three independent albums. All of these albums featured the rock and worship styles that he grew up with, but as he continued to progress, his music began to mature and he began to create songs that leaned more toward the contemporary pop genre.

His southern drawl, humility, and nice boy looks remind you where he comes from, but his sound will show the world where Joel Vaughn is headed. Settling in to deeper and modern music—Vaughn’s voice truly shines and it is clear that he is home.