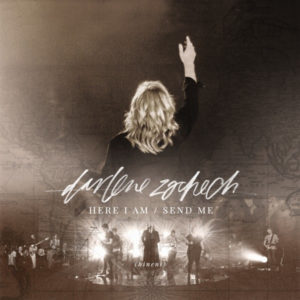 Renowned worship leader, author and pastor Darlene Zschech releases the Here I Am Send Me (Hineni) CD/DVD globally on March 3, 2017 from Integrity Music. Recorded live with her team at Hope Unlimited Church on the Central Coast of New South Wales, Australia, the album is Zschech’s first project following a life changing cancer diagnosis in 2014 and features 11 new songs penned by her along with guest writers like Martin Smith, Paul Baloche, Jenn Johnson and Leeland Mooring.

Here I Am Send Me is also Zschech’s first new album since 2013’s critically acclaimed Revealing Jesus (buy). Produced by Andy Macken, the new recording opens with a full-on declaration of the greatness of God in the song “You Are Great” written with Martin Smith (Deliriou5?) in response to the most challenging season of her life.

“When I was at my sickest, Martin flew over from England to sit with us, sing songs over our church, and walk and talk with me and my husband, all the while speaking courage into us,” Zschech says, her voice full of emotion recalling the dark days after her diagnosis of breast cancer that is now in remission. “It’s week one of treatment and you feel like you’re going to die, and Martin said, ‘Darls, I know you’re going to want to write songs about this season. What do you want to say?’ And I said, ‘I want to say ‘HE IS GREAT!’ And so we wrote this song together and have been singing it in our church. That’s where it started… In the midst of the fire, it doesn’t change who our God is.”

“Cancer is a dreadful thing,” continues Zschech. “The medical world doesn’t like to use the word ‘healed.’ They like to say the word ‘remission’… but I’m believing God’s report over my life. I speak Psalm 91 over myself every day, I take my medicine and I take the word of God and I do my best with what I can do in the natural and trust God with those things over which I have no power.”

Following this opening track, the album proceeds to take listeners through a journey declaring God’s greatness, love and call, and gives worshippers a voice of response, as in the song, “You Will Be Praised.” Written with Baloche and Johnson upon Zschech’s first return to America after cancer treatment, the song unabashedly declares the power of the Holy Spirit living among us that makes fearlessness possible in every season and circumstance of life. It is, in many ways, her testimony.

The album also features “Beloved,” a modern hymn of surrender co-written by Zschech with Mooring and Casey Moore. Other standouts include “Love And Wonder,” written by the Zschech’s teen daughter, Zoe, and Bonnie Gray from Hope UC, “Kingdom Come,” co-written with Thomas Macken and reflecting a year-long teaching theme at the church and “Go,” written with Andy Macken, that closes the album.

This closing song of commissioning is a message that will be sensed throughout the project by listeners, including in the song from which the title track was gleaned.