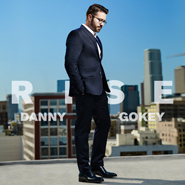 American Idol alum and vocal powerhouse Danny Gokey is set to release his fourth studio album, Rise (buy) on Friday, January 13, 2017. The album features its first single, the title track, which is already poised to be one of Gokey’s biggest to date. But Rise not only boasts Gokey’s incredible vocal prowess and range, it features his emerging talent as a songwriter on all but two of its songs. It’s never been more evident that Gokey is an artist with much to say, drawing upon the highs and lows of his own life experiences that he shares openly with his fans.

Gokey’s previous 2014 album, Hope In Front Of Me (buy), was largely informed by the death of his first wife, Sophia, who died unexpectedly after what should have been routine heart surgery. To this day, the experience has shaped who Danny has become. But on all 12-tracks of his new album, he documents how far he has come …risen, actually… above his adversities—and argues that others who wrestle with similar challenges can find new meaning in their lives, too.

“I wanted to create an album that not only challenged me musically, but that connected with people in an honest and sincere way,” said Gokey. “I wanted to use the peaks and valleys of my life’s experiences to create a feeling through the music, while conveying a message of optimism through its lyrics. I’m hoping that it resonates with everyone that takes the time to listen.”

Drawing from his own experiences with depression and searching for meaning, he assures listeners that hope beckons even in the darkest moments (“Stronger Than We Think”). He acknowledges the social unrest that clouds our world, but points toward the light that lies beyond its reach (“Better Than I Found It”). He promises that no problem is too great to overcome (“The Comeback”) and that even those wounded by loneliness can find love (“Symptoms”).  All of these messages stem from Gokey’s most personal struggles and triumphs. And their power stems from his unique eloquence as a writer and passion as a vocalist.

BMG recording artist Danny Gokey became a favorite of millions of fans as a Top 3 finalist on Season Eight of American Idol.  His first album, My Best Days (buy) debuted at #4 on the Billboard Top 200 album chart. Following, Danny has celebrated a series of #1s including his latest full album release, his first award-winning holiday album, Christmas Is Here (buy), as well as singles, including “Hope In Front Of Me” and “Tell Your Heart To Beat Again.” He is also the founder of Sophia’s Heart, an organization established in honor of his late wife that provides hope and help to homeless families in crisis. It also has a thriving inner city music & arts program in Danny’s hometown of Milwaukee.