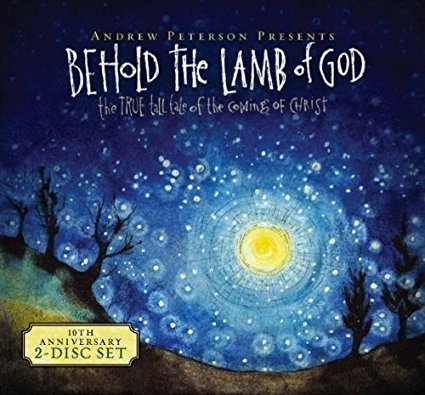 NASHVILLE, Tenn.—Singer/songwriter/author Andrew Peterson will launch his highly popular Behold The Lamb Of God Christmas Tour on Nov. 30, 2016 in Houston, Texas. The special guests for this year are the acoustic duo Jenny & Tyler, along with Jill Phillips, Andy Gullahorn, Garret Buell, Cara Fox, Gabe Scott, Ben Shive, Nate Dugger and Joe Causey. This marks the 17th year for the holiday event that has become a Christmas tradition for families and churches across the country. The tour will visit 15 cities, including Birmingham, Alabama, Orlando, Florida, Arlington and Richmond Virginia, and will once again feature two nights at the historic Ryman Auditorium in Nashville, Tennessee. Tickets are available at www.andrew-peterson.com and at local venues.

“Each year I’m more grateful than the year before,” said Peterson. “When it comes to this group of friends, I have too many fond memories and moving moments to count—and that’s not to mention the profound experience of telling this particular story over and over again.”

Peterson launched the Christmas tour in 1999 to present a musical rendition of the Christmas story and to reinforce the true meaning of the season. It was embraced by fans nationwide because of the powerful performances, entertaining stories, and the sense of community between Peterson and his friends on stage. The result was multiple sold-out venues and yearly return engagements. In 2004, Peterson to recorded the album Behold The Lamb Of God: The True Tall Tale Of The Coming Of Christ (buy) to critical acclaim, and was named one of the ten best Christian albums of the decade by Rhapsody.com. In 2009, Peterson released a 2-disc 10th Anniversary Edition of the project that includes a remastered version of the original CD and a live recording of the Christmas concert from 2008.