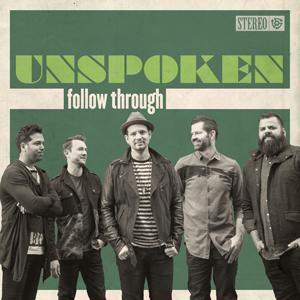 It’s one thing to start strong. It’s quite another to follow through, to continue delivering and maintaining that initial strength and effectiveness.

Without question, the band Unspoken started strong. Their self-titled debut album on Centricity Music yielded no less than four Top 5 singles. “Who You Are,” “Lift My Life Up,” “Start A Fire,” and “Good Fight” each placed Unspoken squarely into the consciousness of Christian music fans world-wide. With “Start A Fire” peaking at No. 1, the band solidified their place as critical and fan favorites.

But as with all strong starts, the true challenge arises when it comes to maintaining that momentum. Such was the feat facing Chad Mattson, Mike Gomez, Jon Lowry and Ariel Munoz when they began considering album number two.

“Over the years, things get comfortable and it’s easy to let things slide,” says Mattson. “Our heart was to get back to those first passions we had.”

Passions that eek out from the desperate attempt to pay rent every month and keep the power on. Passion that derives from the divine pursuit of a holy call on your life that defies what the world might deem acceptable or even reasonable.

Mattson added, “We’ve been doing this for thirteen years. We are [now] in a completely different season of life. On the first record, there was so much struggle and desperation. This time around, there was a lot of gratitude and a sense of victory about some of the doors the Lord has opened for us. Being aware of that drove home the reality of God’s sovereignty—He’ll do what He wants when He wants.”