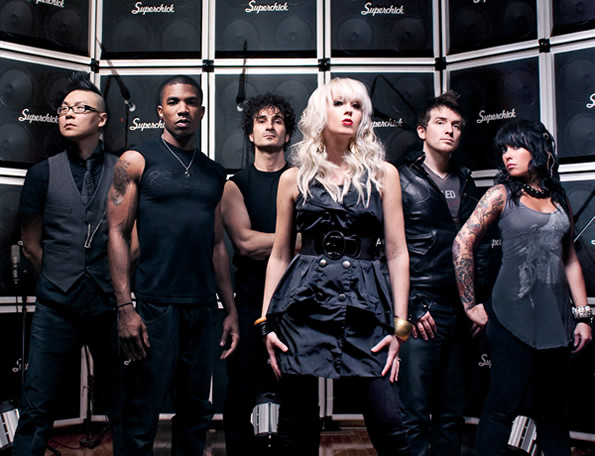 Few bands embody the meaning of the word “innovative” more completely than Superchick. Their unique brand of power-pop put them in a tier all their own within Christian music. After over a decade of ministry, though, the band members are moving on. Recollection stands to be their final album, containing 11 of their greatest hits, plus five new songs. While the album celebrates their ministry, it also serves as a tribute to their drummer, Chase Lovelace who sadly succumbed to a battle with cancer earlier this year.

“When he first started chemo, Chase called me to say, ‘Don’t finish the record without me; I’m coming back in the fall,’” Superchick founder and band member, Max Hsu, recalls. “We managed to get some studio sessions with him and some of Chase’s rhythmic creativity lives on in these songs. They are the last words in a sentence that was brought to a full stop by his passing. These new songs are dedicated to his fighting optimism and I hope they honor his memory.”

CCM recently spoke with Max about closing this epic chapter in their lives.

CCM: What has this journey that Superchick has been on meant to you?

Superchick is about what happens when you say “yes.” There are always a thousand reasons to say “no,” but what we started in a basement became an amazing ride that changed all of our lives. We did the best we could with what we had and the fans took it the rest of the way. I wish there was a better word than “fans” because it was more a parade of people running along with us and carrying us on their shoulders. When children have a velveteen rabbit, it’s not loved because it has value; it has value because it is loved. We were a band made real by love. We got to live the idea that we were spreading: God uses ordinary people to do extraordinary things. We didn’t do something amazing; we became part of something amazing. That only happens when you say “yes.”

CCM: With Recollection, how did the songs reflect not only your history, but your new normal, following the loss of Chase?

It was a hard couple years for us while we were making this record; we spent a lot of time in hospitals hoping that the people we cared about would make it through the night, and sadly Chase didn’t. He was an example right until the end of how you never let go of hope and faith. I hope the lyrics reflect what we learned in this time, which is that we don’t know how long we have and so we do not have time to waste on fear, anxiety and pettiness. Each day is a gift we cannot take for granted, and I hope when it’s my turn that it will be said of me that I lived well and fully and was always able to find the beauty in every day. I try to see the world like it’s my first year and live like it might be my last (that doesn’t apply to credit card debt).

CCM: Is this farewell bittersweet?

When something has been part of your life for so long, it’s going to have a big emotional impact when you leave it. All major change is scary, but it’s necessary to keep moving forward. When a door closes, it frees you up to walk through other doors and be challenged in other ways. My goal in life is to always be learning and growing. If I don’t actively work on it, I find myself becoming smaller and harder. It’s safe but it ends with me like an old dog always barking at things I don’t understand.

CCM: What has God revealed to you and the band about Himself and your role in His kingdom throughout the years?

When the waters of life rise above your head and you’ve swum until you can’t swim anymore, when you are well past exhausted and there is no land in sight, the trick is to learn to float. Floating requires that you stop struggling and swimming. You lie back and rest and somehow you stay above the water. To float you have to believe that something you can’t see will hold you up.