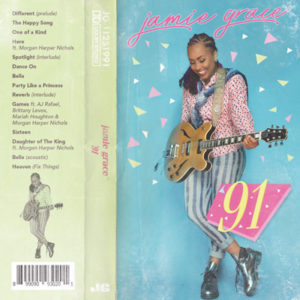 On September 1, 2017, Dove Award-winning, GRAMMY-nominated singer-songwriter Jamie Grace dropped her first studio album since 2014—back when her track “Hold Me” (featuring TobyMac) made her one of only four female Christian artists ever to boast a certified Gold single.

Grace’s new LP, titled ’91 (after her birth year—buy), which released independently and featured her sister and Harper Still partner, Morgan Harper Nichols, as well as an eclectic blend of musical flavors. The Los Angeles-based musician discussed this “comeback” album with us at CCM Magazine earlier this month.

CCM Magazine: What’s’ your take on the reaction to ’91 so far?
Jamie Grace: I’ve had the most overwhelming experience with this record, as far as reaction. When the album came out, and the next five-to-seven days there after, my sister and I were away filming and I didn’t have my phone. We didn’t have access to the internet, so I didn’t know anything.

By the time I got home and turned my phone on for the first time I saw that it had gone number one on iTunes! People were tweeting about it, making videos to the songs, and friends were texting me back home. I was particularly nervous about the song “Reverb” on the record, and how people were going to react to it, and Mandisa said that she loved it. I was like, “What?! So cool!”

CCM: What was the film shoot for?
JG: I can’t really say what it is yet, but we were away filming for two weeks.