Launching his career more than two decades ago as a lead vocalist for GRAMMY®-nominated genre giants NewSong, Charles Billingsley has since headlined more than 3,000 concerts, released 24 recordings as a solo artist and garnered seven #1 Inspirational radio hits. Also a sought-after worship leader who oversees the music ministry at Lynchburg, Virginia’s Thomas Road Baptist Church, he is an artist-in-residence and instructor at Liberty University; hosts a daily syndicated radio broadcast, “Words On Worship;” and regularly appears at such popular events as Women of Joy, Dr. David Jeremiah’s Stand Up Tour, Gridiron Men’s Conference and Celebrators Conference, among numerous others. 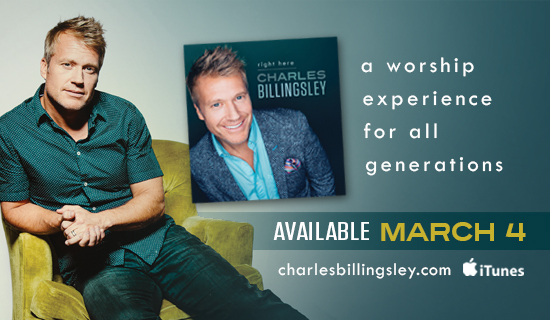 “With every record, I try to push it just a little further than I did before, stylistically, without compromising the message at all,” says Billingsley. “But I also look for songs that people will sing—that they can drive down the road worshiping the Lord with, but also sing congregationally.”

Highlights of Right Here include the vertically-focused anthems “Victory (The Blood of Jesus),” “Hallelujah for the Savior” and “Jesus You Are;” the multi-generational “There’s Nothing My God Cannot Do;” Billingsley’s take on the Delirious? hit “Majesty (Here I Am);” and “See You Again,” a duet with multi Dove Award-winning worship leader Meredith Andrews.

Right Here, the highly anticipated StowTown Records debut, is distributed via Provident/Sony Distribution and is slated to release March 4.