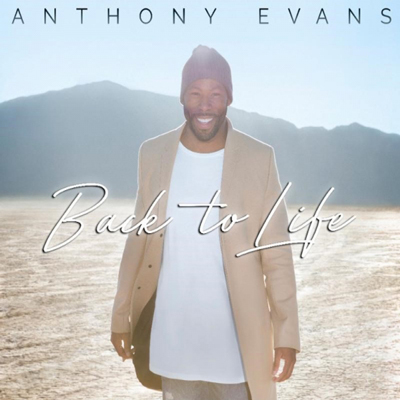 Anthony Evans has lived a lot of life in the past few years. He soaked up some valuable lessons being involved in The Voice and has embraced the new friendships he’s made after relocating to Los Angeles, California. But most of all, he’s discovered that God can teach him lessons in the most unexpected places.

Those experiences inform the songs on his new album, Back To Life (buy). The gifted worship leader’s eighth album finds him collaborating with some of the top names across multiple genres of music. He’s co-written with Cindy Morgan, Martha Munizzi, Krissy Nordoff, Michael Neale and Kirk Franklin while the project was produced by GRAMMY-winner Max Stark. He also worked with vocal arranger Tim Davis, whose credits include Barbra Streisand, Celine Dion, Sam Smith and Mariah Carey.

Evans’ season of collaboration extends to his current tour with his sister Priscilla Shirer, lead actor in the hit movie War Room. The siblings will hit the road this spring on The FerVent Tour, an evening of Shirer’s teaching and Evans worship leading. During a recent visit to Nashville, Evans took time over a laid back brunch to discuss his latest endeavors with us.

CCM Magazine: I understand that the new album was initially going to be a double album—one set a worship album and another songs about life from a faith-based perspective. What changed and when is the other project coming?
Anthony Evans: I started writing worship songs and simultaneously writing songs from my perspective as a Christian, but real life issues, so I had both of these things going. There were 17 or 18 songs and I was talking about putting them together, but Martha Munizzi, a great worship writer—just, amazing—she sat down with me and said, “You need to put your worship record out first. Establish that.” I listened to her because it made sense to me.

Then I saw a quote that I saved on my computer from years ago. I had swiped over to that screen and there, the C.S. Lewis quote stated, “We don’t need more songs by Christians about Christianity. We need more songs by Christians about everything else.” I was like, “Perfect!” My next record will be called Everything Else, and that’s what it is. Songs by a Christian about everything else—both albums all made at the same time.

CCM: The first single/video from Back To Life is “See You Again.” Why did you choose that as the lead single?
AE: My team around me helped pick the single. I [happily] relinquish that as radio and singles have driven me nuts for years because I feel that my music lies between two genres of music. I’m not all-contemporary Christian and I’m not completely a gospel artist. I was hearing positive feedback for “See You Again” from a lot of different people, so that’s how it came about.