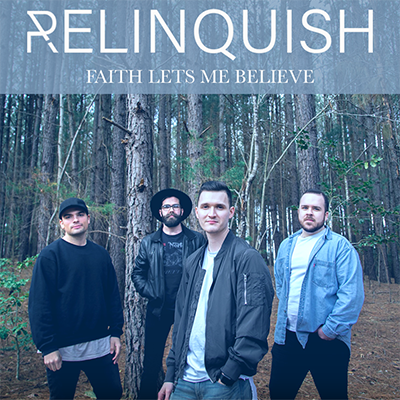 Faith Lets Me Believe is the latest album from the country-pop artist, Relinquish. The album is full of songs of encouragement and hope for this next generation in a fresh country-pop style. The project features guitars, programmed sounds, and mandolin. The album was recorded in Liberty University’s brand new state of the art Mathena Recording Studio and sweetened by Nashville greats Joel Key (acoustic guitar, mandolin), and Derek Wells (electric guitar).

The band, Relinquish, originated in Lynchburg, VA. and became friends while studying in Liberty’s Commercial Music Department. Their successful summer 60 day 2018 tour boasted 58 performing dates. They have opened for artists including for KING & COUNTRY, Danny Gokey, Citizen Way, and Building 429. The band is gearing up for a national tour this summer to perform and introduce their fanbase to Faith Lets Me Believe.

If you have heard any of the songs on this album, please rate the album [or song] 1-5 stars by clicking on the stars in the pop-up box.