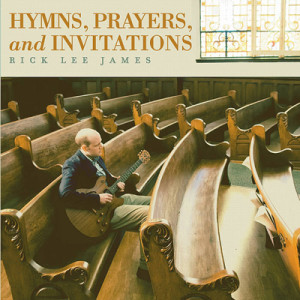 Carrying On the Ragamuffin Legacy | Artist Rick Lee James discusses recording a new song “Thunder” by Rich Mullins, why modern worship music should focus on “turning over tables in the temple” and his passion for bringing attention to the international refugee crisis.

Rick Lee James is a worship leader, singer and songwriter, speaker, author, and Podcast host with over twenty years of experience in ministry. He has shared the gospel through music in numerous venues from the National Worship Leader Conference to the world famous Ryman Auditorium. My personal introduction to Rick Lee James’s work came in the form of his critically acclaimed record Hymns, Prayers & Invitations (buy) where I was immediately struck by the candor, musicianship, and theological depth of his music.

James is songwriter who doesn’t just turn a line, but cultivates lyrics that are planted firmly in deep theological roots. He composes with the complexity and depth of a musician who learned the craft on stages in the music-rich traditions of Nashville, Tennessee. James’s latest work is a music video campaign for his moving song, “More Than The Watchman,” (based on Psalm 130—watch video on this page, click “play” above) that is being used to raise money and awareness for the Syrian Refugee crisis. In preparation to record a unique new album, he has also recently been chosen to record an unreleased song from one of his musical heroes: the late Rich Mullins. We had the chance to ask him few questions about his passion for refugees, his musical influences, and the unique intent of his upcoming worship record.

CCM Magazine: What does the chance to record Rich Mullins unreleased song, “Thunder,” mean to you?
Rick Lee James: Rich is an artist whose music moves me in such a way that I can honestly hear God speaking through his art. I have prayed on many occasions, “God, please let me write music to leads people to you in the way that Rich Mullins music has done for me.” So when Randy Cox, Rich Mullins first publisher, called me to ask if I would be willing to record some of Rich’s unfinished songs, I was both elated and terrified that such an honor would be entrusted to me. It quite honestly hit me like loud clap of thunder would. I wasn’t expecting it and I was in awe after I heard it.

It was extraordinary listening to Rich’s voice on an old shabby recording knowing I was one of the few people to ever hear the song. When I grabbed my guitar and played it the first time, I felt like Rich and I were having this private moment somehow, and that experience will always be very special to me. I am also excited that we will be making a mini- documentary while recording “Thunder,” so that we can tell some of Rich’s story through the process.