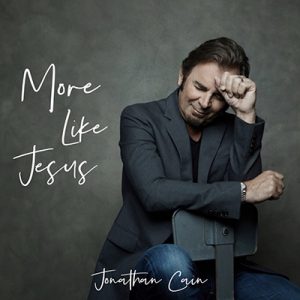 Nashville, TN (March 12, 2019)
Rock & Roll Hall Of Fame inductee and Journey member Jonathan Cain releases his first new single of 2019, “More Like Jesus,” from Identity Records. Available at digital retailers and streaming outlets globally March 22 from The Fuel Music. The song is from Cain’s fourth new solo album in as many years, which is set to release May 3, the new full-length album title, track listing and more will be revealed in the coming weeks.

Written in response to Cain asking himself what he should pray for and what would be his ultimate New Year’s resolution in 2018, “More Like Jesus” became his personal anthem that helped carry him through a huge, 58-city arena/stadium tour with Journey that played to over one million people last year. An integral part to one of the most popular American rock bands of all time, Cain is intent on “walking his life out more in the mind of Christ.”

“To be more like Jesus,” Cain declares, “To find forgiveness after being forsaken, ready when I’m asked to sacrifice, to pray for the broken, to win souls along the way and declare His Living Word as truth.”

Recording the song in his state-of-the-art Addiction Sound Studios in Nashville with producer, mixer David Kalmusky, known for his work on multiple Platinum albums, Cain also released “More Like Jesus” as a lyric video at https://youtu.be/bPbnUFoTb6w.

The new music follows Cain’s Billboard, AllMusic and CCM Magazine featured The Songs You Leave Behind, which released last summer as the companion to his Rolling Stone-lauded, Publishers Weekly-bestselling book, Don’t Stop Believin’: The Man, the Band, and the Song that Inspired Generations. In the book, Cain shares his remarkable story as well as behind-the-scenes details of his decades-long career with one of America’s favorite rock bands.

Writing/co-writing some of the biggest rock songs in history, including “Don’t Stop Believin’,” which is the No. 1 digital catalog rock song, as well as mega hits such as “Faithfully,” “Open Arms,” “Separate Ways,” “Who’s Crying Now” and many more, Cain released the acclaimed What God Wants To Hear in 2016 and his first Christmas solo album, Unsung Noel, in 2017.

For all the latest news about Cain, his solo albums and book, go to http://jonathancainmusic.com