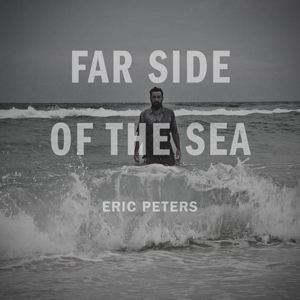 I was working a merch table at a concert festival recently when a young fan approached. She’d really liked what she heard from one of the bands, even though she was totally unfamiliar with their music. “Which album should I buy to best introduce me to the band?” she asked. I handed her a greatest hits compilation, but then I also mentioned an older studio album. “This one really captures their essence,” I added, “especially this third song. It’s my favorite.” She bought both. I might be a good salesman.

Given the saturation of music in our digital age, it’s not uncommon to encounter artists who have made great music over long careers and yet, somehow, remain unknown to so many listeners. And, like the new concert fan, once you find one, it’s tough to know where to start.

Here, then, is one such artist, and a musical introduction – an on-ramp, so to speak. Eric Peters is a Nashville singer-songwriter who just released his tenth studio album, Far Side of the Sea (buy). He has an engaging and warm voice with just a hint of frailty, and he writes songs that tend to bloom from a profoundly honest emotional core. He’s also a visual artist, collector of rare books, and a great student of history and birds and other sundry subjects.

“Chrome” (2009) | An onion, a garden gate, a coin, and, in this case, an abandoned bicycle… Peters has a knack for giving voice to inanimate objects and in so doing helping us to see the whole world as a big, remarkable story. This is a tender song with a touch of metaphor and such an affecting vocal that you’ll never look at a bicycle quite the same way again.

“The Old Year (Of Denial)” (2012) | Peters has never shied away from themes like depression and self-doubt. He’s lived through these himself, and the fact that he’s willing to give them voice is a big reason he has so many loyal fans. It’s also a reason his songs can become both confidant and counselor. The Old Year was written as a retrospective retaliation toward a dark year in Peters’ life. It’s an honest appraisal — “There’s so much to be thankful for, and so much to be forgotten” — and a proclamation: “Ha ha! to the old year.” It also opens Peters’ magnum opus, Birds of Relocation. “These Three Remain” (2003) | A fine example of Peters’ earlier work, this is a personification of faith, hope, and love, given the voice of a ragged soldier in WWII. Peters’ voice has the remarkable quality of not only inviting us into a place but also conveying the emotions of the setting. When he sings, “Love: it is the trembling and the scattering of dust / It’s looking out into a field I know that I must cross,” we not only find ourselves in the setting but we remember our own times of trembling. “Voices” (2012) | This is a profoundly transparent song about depression, speaking honesty into the awful things we tend to convince ourselves about our lives and the lives of those who really do love us. Peters dances near the top of his vocal range to declare, instead, that he will listen to the voices of the saints and angels. It’s a song of honesty and triumph that has ministered to many. “Field of Failure” (2016) | Peters’ newest encapsulates many of the themes he’s explored throughout his career, even while it ushers in a markedly new and engaging sound and production. In the convicting song Peters confesses a tendency to try to always be “enough”, for his wife, kids, career, and even for God himself. He also harks back to song four on our list when expressing his hope that his own failures might be met with God’s sufficiency: “I can’t escape from the voices I’ve loved / I try and fail just like Charlie Brown does / I want a heart that is given to love / I hope Your heart is something that I can trust.”