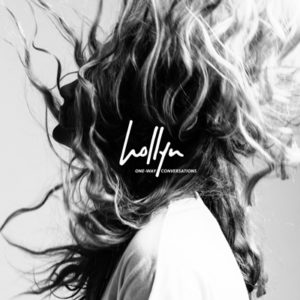 As Gotee Records singer-songwriter Hollyn worked on her debut album, she felt a tension which Christian artists have experienced longer than she’s even been alive.

The twenty year-old was as a crossroads on whether to target the Christian or the pop market. Her mentor and his record label, TobyMac and Gotee, are iconic names in Christian music. But considering Toby McKeehan’s legendary group dc Talk crossed over into the mainstream when it signed to Virgin Records didn’t necessarily make the choice any easier.

With a burden to reach a broad audience, but also a desire to remain authentic about her faith, Hollyn needed way more than one conversation with God to select a lane. When her album, One-Way Conversations (buy), began climbing up the iTunes charts on its February 10, 2017 release date, it was noted as one single, simple category: “Pop.”

One-Way Conversations, which debuted on the coveted Billboard 200, pairs pop production with God-honoring lyrics—which one would expect from an artist who takes their calling as seriously as Hollyn. The Waverly, Ohio native faced sky-high expectations after she earned a Dove Award nomination for New Artist Of The Year in 2016, but One-Way Conversations meets, and aims to exceed them.

Hollyn discusses her stressful, yet inspiring album creation process with us for this CCM Magazine cover story.